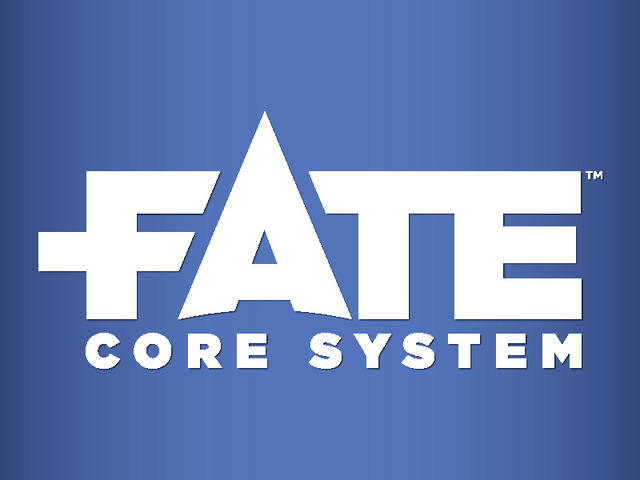 First off, a confession: when I first encountered FUDGE, as a text file on the pre-web Internet, I almost stopped reading when I got to the bit about the dice. An inveterate AD&D player, I love me some non-six-sided polyhedra. If EP has one flaw, it's that we only use one kind of die. So it goes without saying that I dislike when games only use six-siders, and by extension, when games only use six-siders marked with pluses, minuses, and blanks.

But then there's Fate. Oh, Fate. If not for your ugly-ass dice, you & I could be so perfect together. There's so much that's compelling about this rules engine, and so many possibilities that I can see for using it with our setting.

Eclipse Phase, you see, is a pretty darned old school, grognardy game. Peel back the fascination with emerging technologies, the OCD scientific research, the transhuman philosophy, and the oft-remarked-upon lefty politics, and what you have underneath is a game that is part Call of Cthulhu, part Shadowrun, and all over rooted in the wargaming tradition. We like charts & tables, detailed subsystems, and a pre-Gumshoe sort of approach to investigative scenarios. And for this we make no apology.

There are certain types of games, then, for which EP is an ideal instrument. Our system gives players who love detail a boatload of knobs to twist and levers to pull. If you like CoC and its various percentile system progeny, welcome home! We've kept a tentacle & a blasphemous AR graphic warm for you. And if you dig problem solving and technical dungeon crawls in the grand Gygaxian tradition, EP is again fertile ground. This isn't to say that you can't do other things with the game, but the aforesaid are particular strengths.

So why would we make a Fate conversion one of our Kickstarter stretch goals?

For all the people who suck at roleplaying-as-engineering-problem. Duh. 😉

Wow. I can be glib. But more seriously, we acknowledge that for some people, our old school style of rules-smithing can be too much. Fate offers a neater approach for some. But more importantly, the Fate system itself has some goodies in it that get me pretty charged up as a game designer. So let's talk about those for a sec!

When considering Fate's Character Generation system, the big thing that jumps out at me is the use of time phases. Here you've got something that ties into the drama of EP, because "The Fall" is going to occupy a phase for just about every character, and what goes on during that phase almost certainly derails the PC's previous life completely. The skills and aspects they picked up in earlier phases might shape what they do during the Fall and its aftermath -- or they might fall completely by the wayside as the PC gets catapulted into a new and probably much less comfortable life.

Character generations gives you aspects (a key player resource in Fate), and these map somewhat to EP's Motivation and Moxie mechanics. But they also map to our backgrounds, factions, and character concepts, yielding an interesting way for players to decide when and where their PC will shine. Are you enough of a Gatecrasher to flip that die to a '+'? Are you Barsoomian enough to re-roll when the cops turn loose their baboons on the protesters?

And that's just the simple uses of aspects. Other things that exist in the EP world -- your muse, your social networks, your manipulative Firewall handler -- beg to be expressed in this mechanic as well.

Finally, Fate's resolution systems provide a much lighter way of resolving challenges. The ladder system is elegant, if a bit loosey-goosey by old school grognard standards. Personally, I like a hacking system that requires a mastery of the details to use effectively, but there's definitely an appeal to the GM being able to simply define a ladder for a given system and let PCs start throwing dice at the obstacle. This approach is particularly handy if the GM knows in advance that a given system is going to get hacked at some point as part of a scenario.

I should close by saying that these are just some preliminary thoughts on a Fate vs. EP mashup. The team we're putting together to create the actual product will have much more grounding in Fate than I, and might have very different ideas about how the two systems meet. In any case, I'm very much looking forward to seeing what they come up with.

Let's get this unholy alliance started! If you haven't backed us on Kickstarter yet, please consider doing so now. Our Fate conversion will be unlocked when we hit $100,000, at which point new backer levels including EP/Fate products will also become available.

This website uses cookies to improve your experience while you navigate through the website. Out of these, the cookies that are categorized as necessary are stored on your browser as they are essential for the working of basic functionalities of the website. We also use third-party cookies that help us analyze and understand how you use this website. These cookies will be stored in your browser only with your consent. You also have the option to opt-out of these cookies. But opting out of some of these cookies may affect your browsing experience.
Necessary Always Enabled
Necessary cookies are absolutely essential for the website to function properly. These cookies ensure basic functionalities and security features of the website, anonymously.
Functional
Functional cookies help to perform certain functionalities like sharing the content of the website on social media platforms, collect feedbacks, and other third-party features.
Performance
Performance cookies are used to understand and analyze the key performance indexes of the website which helps in delivering a better user experience for the visitors.
Analytics
Analytical cookies are used to understand how visitors interact with the website. These cookies help provide information on metrics the number of visitors, bounce rate, traffic source, etc.
Advertisement
Advertisement cookies are used to provide visitors with relevant ads and marketing campaigns. These cookies track visitors across websites and collect information to provide customized ads.
Others
Other uncategorized cookies are those that are being analyzed and have not been classified into a category as yet.
SAVE & ACCEPT